The Student Robotics 2014 competition is now under way. This year we have three hundred students registered, across fifty four schools, and three different countries. They now have six months to design, prototype and build their robots, to take part in this years competition game. You can find more information about the people taking part on their team pages.

The Kickstart event was spread over three different locations, at the Universities of Southampton and Bristol, and Greshams School in Norfolk. Attending teams received their electronics kit, an introduction to SR and exercised their robot building skills through a series of tasks demonstrating the range of functions that our electronics kit provides.

This year our kit has new motor controllers, allowing our teams to use twice as many motors as in previous years. We’ve also included a ruggeduino as part of each kit. As well as performing basic input and output, the ruggeduino can be reprogrammed by teams to have more advanced, custom functionality. We’ve also kept all of our past features, such as the servo controller and vision system.

This year’s game, Slots, challenges teams to collect 20cm boxes from the arena, rotate them and place them into central zones, with bonuses for placing them in the adjacent slots. During the competition teams have three minutes to place as many boxes as possible, competing against three other robots at a time.

After a league and knockout stage, the best robot will be crowned the SR2014 champion! Full details are available in the rules.

We’re hoping that this years competition will produce the most innovative and exciting robots that we’ve ever seen during Student Robotics, and are looking forward to seeing how they perform at the Competition.

A New Motor Controller to get SR2014 Robots Dancing

A robot’s ability to move is strongly linked to its ability to amaze. Student Robotics is all about encouraging young people to build amazing robots, and so our volunteers work hard to deliver tools and guidance for getting robots moving. That’s why, for SR2014, we’re significantly improving the motor controllers that we provide to our teams.

The design and manufacture of the new motor controller has been lead by Richard Barlow. It builds upon our last 7 years of experience in developing robust electronics suitable for use in schools. Every one of SR2014’s 54 teams will receive two of our new USB motor controllers, each of which is capable of driving two DC motors.

With the growing size of Student Robotics, changing a single part of our kit is not a small undertaking. Yesterday evening, students from Headington School in Oxford along with several volunteers from the area, assisted Richard in assembling 180 plastic cases from laser-cut parts for our new stash of motor boards. 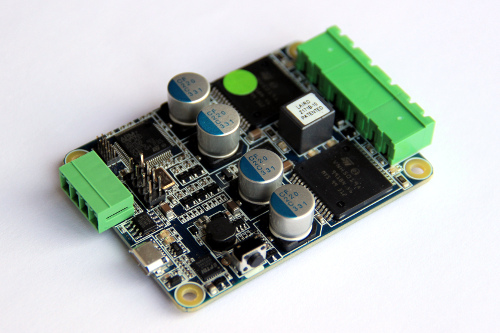 SR2014 is to be the largest Student Robotics undertaking so far, and our volunteers have been hard at work for the last few months preparing for its Kickstart, which is now less than two weeks away. On the 12th of October, 54 teams from the UK, France, and Germany will receive their challenge from Student Robotics. Along with this challenge, the teams will be provided with a set of electronic parts which will form the foundation of their robots. With this kit, and the hard work of our teams, we’re looking forwards to seeing some amazing things transpire at the SR2014 competition in April.

Today we opened up registration for the current iteration of our competition, SR2014. The rules for the game the robots will play will be announced at our Kickstart event at the beginning of October. Teams will then have just over six months to construct their robots before the competition in April 2014.

If you have a team of 16-18 year-olds that you would like to enter for the competition, please fill out this interest form and we will get in touch with you as soon as we can. Thanks to our sponsors, we can accept even more teams for this year’s competition.