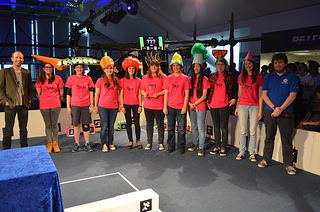 Headington School, Oxford came top of the class in this year’s Student Robotics tournament this weekend (27th May 2014) at The Racecourse, Newbury. The team of sixth form girls beat 53 other school teams from the UK, France and Germany with a self-driving robot that uses a camera to find prize tokens.

Student Robotics 2014 was the biggest and best yet, with over 230 rounds played over 2 days. Up to four robots competed head to head in each round, pushing past each other to grab as many tokens as possible in 3 minutes. Run entirely by volunteers, Student Robotics is free for teams to enter thanks to our sponsors, primarily the Motorola Foundation and the University of Southampton’s School of Electronics and Computer Science. This year the competition was also livestreamed on the internet thanks to our latest sponsor, the British Amateur Television Club.

This year’s competition involved building a robot that could move around an arena handling bulky prize tokens and drop them into tight-fitting slots. In addition, and in a first for Student Robotics, the token’s orientation was also a means to score points. The best robots had to be able to rotate them before placing the token into their designated area.

Find out more about the intricacies of the game in the rulebook.

Aside from the best scoring robots, we also reward teams which excel in other areas.

The first new team to post a video of their robot moving on its own in a controlled manner win the First Robot Movement award. This encourages new teams to get a basic chassis built quickly, as well as getting them to write some simple control software for it. The committee were impressed that Torquay Boys’ video appeared within two weeks of the Kickstart. 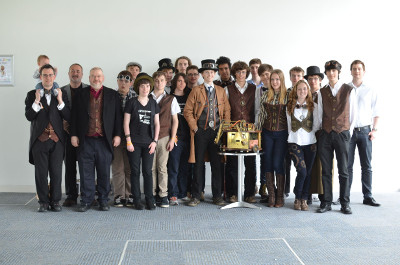 The Committee Award is given to the team which finds a simple and elegant solution to a problem. This was demonstrated brilliantly by MAI, whose robot used a suction grabber to roll the tokens towards it in order to turn them over as well as easily carry them.

The Online Presence prize is given to the team judged to have the best combination of website, blog and other online activities.

The Robot and Team Image prize is given to the team which present their robot and themselves in the most outstanding way. Systemetric (HRS) impressed the judges with their steampunk costumes and brass and mahogany robot (pictured).

† Due to an error in the handling of the scores in the final match, this was unfortunately announced incorrectly as only CLF on the day.

For full details on the awards, please see the rulebook.

Every year the teams get better and better, which is not an easy feat! The judges were very impressed by the wide variety of robots entered this year, including the hexapod from Greshams, a boarding school near Norfolk.

This is the first walking robot Student Robotics has ever seen, walking in the absent dust of the hovercraft we saw at last year’s competition.

If you didn’t take part but your appetite’s been whetted, or you want to enter again next year, the sign up page for next year’s competition will be up soon. Get forming your teams and talking to your teachers now!

High resolution photographs of the event can be found on the Student Robotics 2014 competition Flickr group. For more information, please contact us.